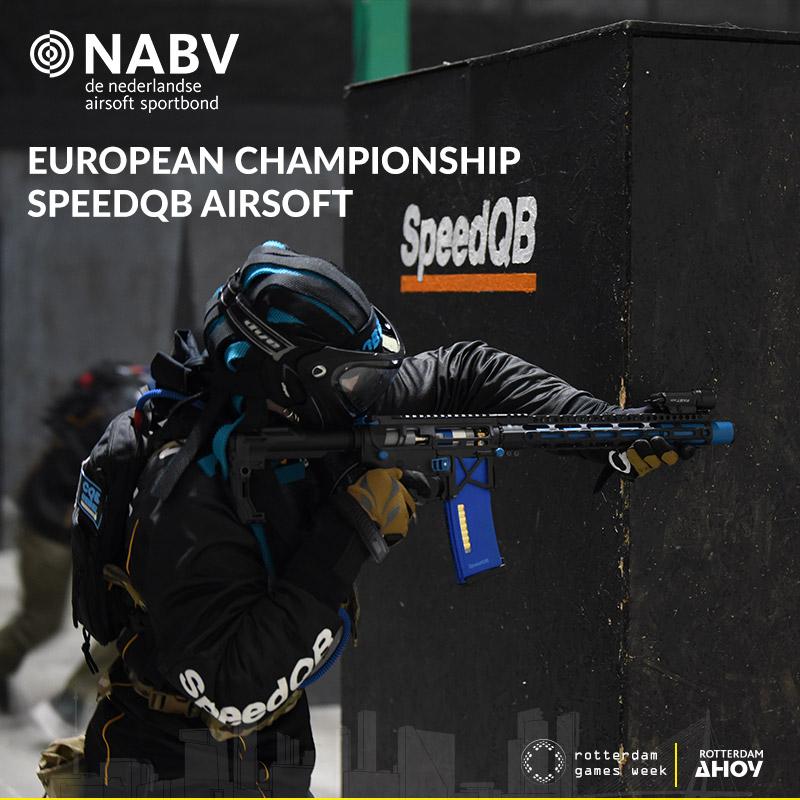 The Dutch airsoft sports association (NABV) has joined forces with SpeedQB Europe to organize a topnotch event in Rotterdam Ahoy: the European Championship SpeedQB Airsoft during DreamHack Rotterdam. At the event, 24 airsoft teams  from all over Europe will from 18 to 20 October battle against each other shooting small biodegrabable balls in a special SpeedQB arena. Like a real-life video game, imagine a first person shooting game brought to life. For the audience in Ahoy there will be stands to watch the gameplay from above!

SpeedQB is a new, competitive high-speed airsoft game type. A competitive 5-vs-5 team shooting sport focusing on creativity, efficiency and team chemistry. In a SpeedQB tournament during each match a total of ten players (in two teams) compete against each other in a relatively small arena. The arena is a closed area of 18 x 35 meters, filled with obstacles to be used to your advantage.

The game is similar to capture the flag, in which players rush to obtain a centrally-located flag and hang the flag in the opposing team’s spawn point. It’s life action equivalent to esports, the ultimate entertainment for the digital generation. With 3 rounds, each of 4 minutes maximum. The winner is the team that won most rounds of a match.

During DreamHack Rotterdam, there will be several demonstrations. Also, as a special DreamHack scoop: you can try out SpeedQB yourself in between matches. There will be a limited number of people that can participate, so people who are interested have to be sure to sign up for this at the NABV area on time. A free visit to the European Championship SpeedQB Airsoft is included in the DreamHack Rotterdam ticket.